There are more women in BMX than ever before, and playing a huge role in that is Angie Marino. Leading the charge in the emerging days of women’s freestyle, Angie has doubled as both an inspiration to get girls on bikes and a spokesperson to get a women’s class added to events around the world. Growing up in Buffalo, New York, Angie picked up her first BMX thanks to her older brother and quickly began racing. By 15, she made the switch to freestyle BMX and hasn’t looked back. Today, both Angie and women’s freestyle have grown to immeasurable levels. Angie is a consistent podium finisher on both the Vans BMX Pro Cup series and FISE events, she was noted by ESPN as one of the top 50 female athletes in action sports, and she’s a member of the USA Cycling National Team with her eyes on the first ever BMX Freestyle gold in the 2021 Olympics in Tokyo. Now living in San Diego, Angie can be seen at any of the numerous parks in the area ripping around a bowl, roasting a table out of the biggest quarter at the park, and making BMX look good wherever she’s at. 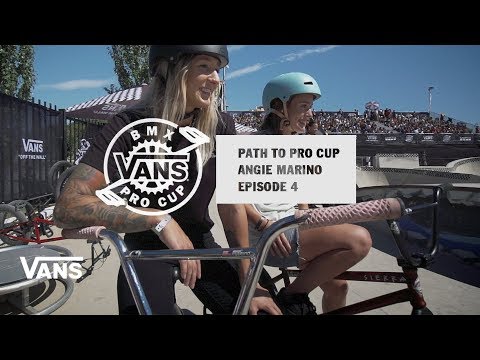